A Yemeni waits for his refugee status to be reviewed in front of the Jeju Immigration Office. Meanwhile, 450 km. away, Seoulites rally around Gwanghwamun Square and chant for the eviction of the immigrants. A different group, only a few dozen meters away from them, raises voice for mercy and care for the refugees. The difference in numbers catches one’s eye, as the former has way more numbers than the latter. Such exemplifies the division in Korea after the surge of Yemeni refugees in Jeju island.

Of course, one cannot call the influx of refugees as a ‘surge’, considering that their numbers are miniscule compared to the actual number of people in Jeju, which is over 60,000 people. According to the Assistant Secretary of the Ministry of Justice Kim Oh-su, the current number of Yemeni refugees in Jeju, dubbed as the “Jemeni,” on June 28, is 982. 430 Jemenis had applied for the refugee status before 2018, and 552 after.

Reasons for such an influx would be that the Visa Waiver Policy of Jeju island. The region, as a Special Tourist Zone, allows foreigners to enter the country without visa. The policy was originally implemented to increase the number of tourists in Jeju island. However, this brought  a result where Jeju is the only place besides Ecuador or Malaysia that allows the entrance of Yemeni refugees, who generally do not have a visa. Like so, the refugees would take a route to Malaysia, and then take the direct flight from Kuala Lumpur to Jeju International airport, entering the country.

Another reason for the influx would be that Korea paints itself as a country that welcomes refugees, compared to other Asian countries. Korea is the only nation in Asia that has a legitimate Refugee Law, which binds it legally to take care of refugees on its doorsteps. Other Asian countries do not have such laws, and the Convention Relating to the Status of Refugees, an international treaty created in 1951 for caring refugees in, does not legally bind them to doing such acts. In this way, Korea, to the eyes of an outsider, is the only Asian country that welcomes and is legally bound to protect refugees. Not to mention how the Korean law allows the refugees to stay longer than usual, thanks to a long reviewing session that lasts a few months, as well as allowing refugees to object if their refugee status is denied, creating a period that lasts a few years.

But seeing from the situation of the 982 Jemeni, Korea does not seem to live up to its reputation as a welcoming country. The Refugee Laws, when they are put to the test, seem to be malfunctioning as Jemeni are receiving no aid from the government, especially as it is revealed that refugee related institutions suffer from lack of funding. The would-be-refugees are living in motels with their own money, when the government should provide them with refugee protection facilities. The only refugee protection facility in Korea is at Incheon’s Yeongjong island. In comparison, the Netherlands have over 30 protection facilities across the country. Provisional aid is also devoid to the Jemeni. To make amends, the government allowed the Jemeni to take jobs in the island. However, this shows how the current law is ineffective in the current situation.

Considering Korea’s diplomatic status across the globe, agreeing to the Convention Relating to the Status of Refugees and that having a tangible law related to the care for the refugees, it is only justifiable to take in the Jemeni. Because of this, the political front and the press have taken the role of rooting for the Jemeni and doing their best to make Korea a better refuge for them. However, prior events caused by the refugees in Europe, such as the Cologne sexual assaults have already negativized the dominant Korean audience’s opinion on the Muslim-dominant Yemeni. Anti-refugee demonstrations have been made in Gwanghwamun square, and over 580,000 people agreed to an internet petition to the Blue House to evict the incoming refugees. The internet news articles discussing the Jemenis are found with xenophobic comments, calling them out as murderers, terrorists, and rapists. Meanwhile, the government and the press are attempting to stay away from being xenophobic and unwelcoming to the refugees. 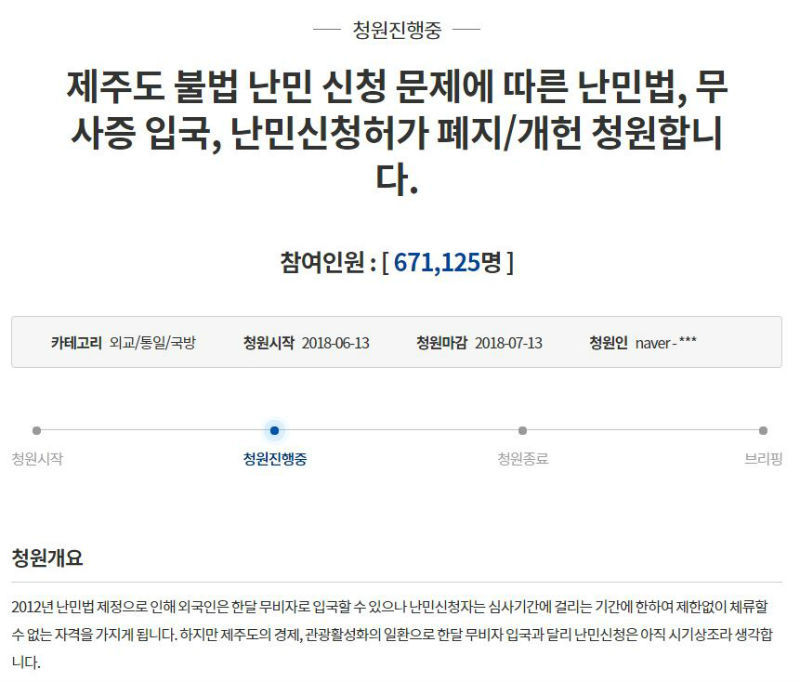 Why such difference in opinions? The reason would be that the two sides have differences in interests. The public’s first instinct is to care only for themselves: Caring for others, or for other countries in this case, is not a priority. But politicians are different. What their words represent is not only their own interest, but the interest of the country as well. And such, if they speak of matters like evicting refugees, they tarnish the country’s reputation. The international environment commonly considers staining human rights as an embarrassment for a country. In this environment, mainstream politicians cannot easily proclaim that the country should not take in refugees. An interview with a core personnel in the Minjoo party’s policy committee by Herald Economics shows this. The anonymous official says, “If we proclaim our stance based on the public’s opinion, the international society will view us (Korea) as a far-right nation. This is a sensitive topic in politics.”

The difference between politics and the public leads to an even deeper crevices of division, with radicals crying out that the government is ignoring the public. The fact that deal with the tragic hardships of the refugees does not help either. With the readers already having a negative mind towards these people, the articles would only seem to be something that tries to manipulate the reader to feeling remorse for the refugees. With this situation ongoing, articles like “We ran away from a war…to another one” from Hangyeore only serves to aggravate the public. Not to mention that the Korean public’s reliability towards the press records as one of the lowest in the world, according to the Pew Research Center.

And with the public’s major contact with the refugees being the negative news from foreign countries, it is very easy for them to commit the error of generalizing the refugees as criminals. The news themselves clouds the public with anger towards the refugees, which is expressed throughout the whole intercourse in this situation. Radical refugee opposers are also spreading news like “all those refugees have financial aid that is 1.38 million ￦,” or “there is a surge of refugees lately because of the Jemeni,” which are fallacious rumors, leaving out important information and misleading the public.

In the end, trust would be the only way for the matters to conclude in an amiable way. With the government evading to answer some of the questions that worried citizens ask, such as how the Jemeni who have not fulfilled the requirements for refugees will get evicted, people will not trust the government to handle this well. What the government should do is answer these questions on the basis of the public’s anxiety: safety. Proclamations and answers should be made to address the situation, such as the specific requirements for the refugees and the process, and how the government is planning to assimilate the reviewed refugees into the Korean society with the least recoil. Along with that, the National Assembly should also have a coherent stance with the government, showing that the ones in power are indeed taking the safety of the citizens into account, and build trust on that premise. Germany’s example would be a good precedent, with how it revised its Refugee Law to swiftly evict those who failed to meet the requirements for a refugee, and to restrain the freedom of the movement of refugees lacking documents.

Meanwhile, the press should no longer print articles about the hardships of the refugees. The press’s role is to not emotionally persuade the public. What they should do is to supply information based on facts and statistics to support them. Through this, citizens would at least gain a minor trust towards the press and the government. The built trust then would allow them to ignore and fact check the rumors and fake news spread by radical opposers, successfully judging them as unreliable.

Of course, Korea’s refugee situation with the Jemeni is on a very minor scale, comparing it with that of Europe’s. Yemen has already been removed from the Visa Waiver Program, therefore the Jemeni count is effectively cut off at less than 1,000. And considering that Korea’s rate of granting refugee statuses is 4.5%, according to the Korean Immigration Services, even less refugees would actually be able to have long-term access to the Korean society. But Korea will have to open up its borders someday, whether it be globalization or the demand to act as an economic power. In those scenarios, refugees and foreigners looking for a chance of economic success would be the first ones to come on our doorsteps, not the rich people from Europe or America. This incident would be an important test for the Korean society, examining if the country is prepared socially and institutionally, and if not, to troubleshoot the problems for that time.